Alan had a mid-life crisis at 40. Over several years he gave up smoking, reduced drinking, became vegetarian, started running and trekking, and took up yoga. Alan continued his career as a professional accountant, but yoga became an increasingly important part of his life, especially as it helped with rugby and marathon running injuries.

At age 60 Alan retired and did Iyengar teacher training with Frank Jesse at Clifton Hill Yoga Studio, becoming a certified teacher in 2002. For over 30 years he has studied with several senior teachers, including the Iyengars in Pune, and also explored different styles of yoga. Alan has been teaching Iyengar yoga for 15 years. 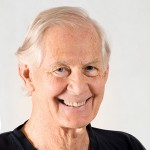